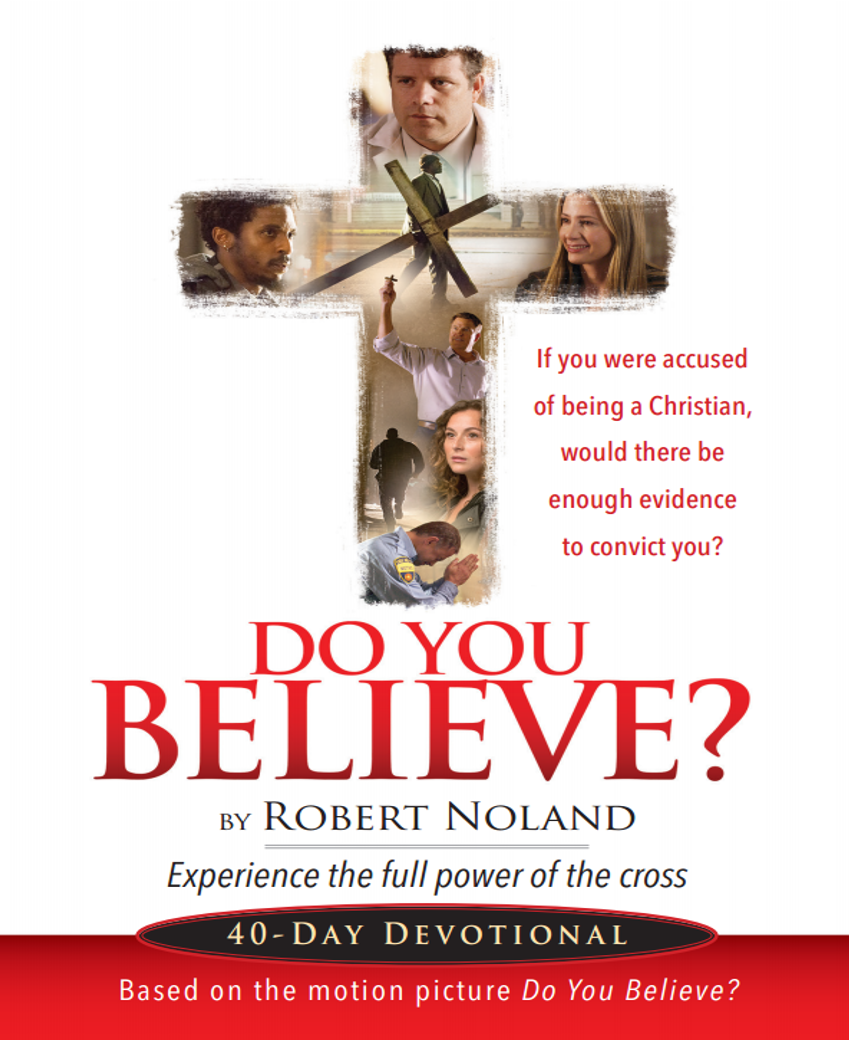 The Do You Believe? Devotional book offers a respite from the rush of life and the peace and hope made available only through the cross.

Experience the full power of the cross - 40-Day Devotional

The cross of Christ has long been a historic and revered religious icon as well as a divine dividing line within humanity. The Pure Flix powerful film Do You Believe? ushers the timeless question of the meaning of the cross to a deeply personal place: “What does it mean—to me?” Is it only a symbol or truly salvation?

The Do You Believe? Devotional book is a 40-day journey centered around the eternal evidence and powerful proof of God’s great love with the sacrifice offered for humanity associated with only One—His Son, Jesus Christ. In the film, a challenging question is brought before our politically correct culture: “If you were accused of being a Christian, would there be enough evidence to convict you?” Regardless of your own answer to such a question, or the place in life you may find yourself, these 40 days can be an investment into your future—and more importantly, your eternity—as you pursue a deeper level of faith for yourself.

Catching up with Cybill Shepherd

Cybill Shepherd stops by to chat about her role in the new film “Do You Believe?” 30 years after “Moonlighting,” and her favorite new role: Grammy.

Ted McGinley: ‘Do You Believe?’ pastor role ‘so enriching’

Visit NBCNews.com for breaking news, world news, and news about the economy

Order Do You Believe? from these online retailers:

Robert Noland began his writing career as a songwriter in 1983, then spent the next 10 years as a touring musician and producer, penning lyrics for artists such as Glen Campbell, Babbie Mason, and Gabriel. He wrote his first series of Bible studies in 1988 and in 1991 wrote his first Christian devotional book for a para-church ministry. Noland has since authored over 50 titles spanning across children, youth, and adult audiences.

In 1996, he wrote a Christian follow-up booklet entitled LifeChange, which to date has sold over one million copies. In 2011, Noland released his first book titled The Knight’s Code and in 2012 released 3SG, a Men’s Small Group Manual. He blogs regularly at theknightscode.com.

Since 2011, Noland has been a free-lance writer and author for faith-based organizations, ministries, and Christian publishers. A book co-authored with RandyFrazee, entitled Think, Act, Believe Like Jesus, released in December 2014.

Regardless of the target audience or mode of delivery via paper or digital, Robert writes what he calls, “practical application of Biblical truth.” He lives in Franklin, TN with his wife of 30 years and has two adult sons. Find him at robertnoland.com.

Order Do You Believe? from these online retailers: